We report the case of a 91-year-old patient who presents a syncopal picture so that when she falls from her own height she suffers severe skull-brain trauma with loss of consciousness, the cerebral CT scan shows subarachnoid hemorrhage and the presence of intracranial bleeding with signs of herniation cerebral, the evolution is towards frank deterioration with subsequent death, had as background the resection of a carcinoma in the scalp with the completion of a flap.

This is a 91-year-old woman who has a syncopal picture with a fall from her own height presenting severe skull-brain trauma with loss of consciousness and sphincter relaxation. Attended in a local hospital and then referred to a more complex hospital where they take cerebral CAT that shows hypodense right hemispherical extra-axial collection with hyperdense area inside that suggests re-bleeding with mass effect on the adjacent parenchyma, subfalcinar herniation is observed and anterior pneumocephalus with deviation from the midline to the left, there is dilation of the ventricular system and obliteration of the bases. While in radiology, she presents a convulsive condition and cardio-respiratory arrest, is intubated and is admitted to the ICU until her death eight days later. Because it is a death associated with an accidental event, a medical-legal autopsy is performed, where an elderly woman of medium size, mixed race is found; What is relevant to the post-mortem examination is scalp necrosis (Figure 1), cranial vault osteomyelitis (Figures 2 and 3), subarachnoid hemorrhage, subdural hematoma with mass effect, cerebral herniation, and dislocation of left hip joint prosthesis is observed. The histopathology report is consistent with acute suppurative meningitis, acute and chronic inflammation of the scalp with folliculitis and peripoliculitis, cerebral edema, cerebral atrophy with gliosis, spongiosis and old hemorrhage. It is determined that the cause of death is the accidental one due to acute meningitis derived from a craniocerebral trauma due to the fall of its own height. 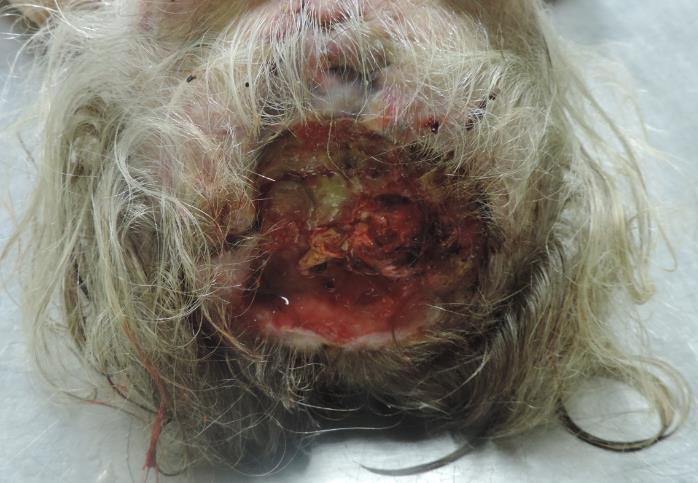 Figure 2: Cranial vault osteomyelitis is observed with purulent collections about the Dura. 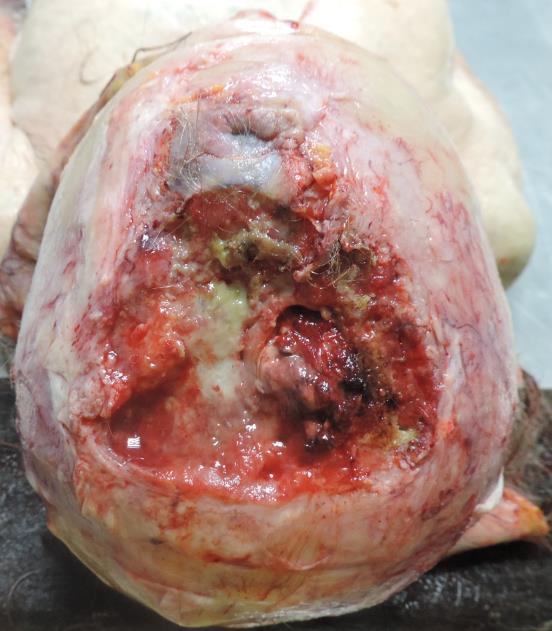 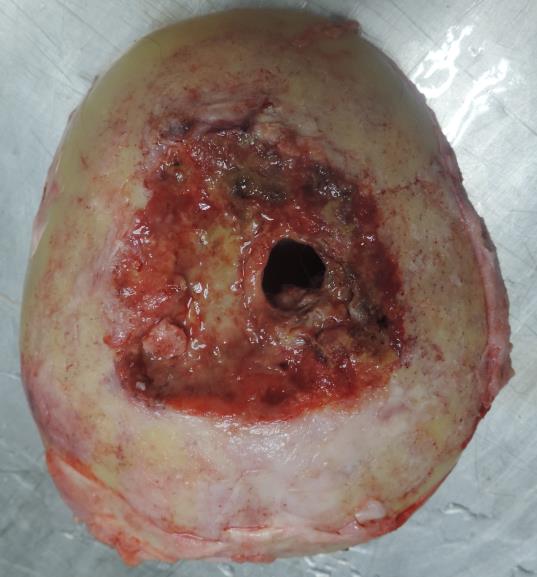 Although in this case the way of death is accidental because the old woman falls from her own height with subsequent complications, incidentally during the necropsy procedure there is a metastatic invasion of the parietal bones due to a squamous cell carcinoma poorly undifferentiated scalp; Revised the literature regarding this type of cancer is the most frequent type worldwide [1], in the head mainly affects the temporal bone, the oral cavity and the maxilla [2-4]. The involvement of the parietal bone due to invasion from the scalp of the same region is infrequent, there is only one bibliographic reference and full healing after surgical treatment followed by radiotherapy is described [5]. We report this case of a Squamous Cell Carcinoma of the scalp with invasion to parietal bones and as an adjunctive factor to the death of a person with a head-to-head trauma due to fall from their own height.

Copyright: Plaza OA, et al. ©2019. This is an open-access article distributed under the terms of the Creative Commons Attribution License, which permits unrestricted use, distribution, and reproduction in any medium, provided the original author and source are credited.

The Michigan Odd Beliefs Scale: A Measure of Suggestibility as Assessed by Endorsement of Urban Myths

The Michigan Odd Beliefs Scale: A Measure of Suggestibility as Assessed by Endorsement of Urban Myths

Cognitive Behavioral Therapy for Insomnia as Treatment for Post-Concussive Symptoms

Open Access by Magnus Med Club Ltd is licensed under a Creative Commons Attribution 4.0 International License. Based On a Work at magnusmedclub.com